One for the ages… Boston Reunion 2012

What UPPPP Caribou Nation!?!!!  We hope this blog post finds everyone well and enjoying the end of the fall season.  Yesterday was our annual Boston Reunion at Fun & Games Arcade.  We had a massive turnout, with people coming in from Maine, New York, Virginia, Connecticut, and of course, Massachusetts.  Big shout outs to Mick and Brynna Strand for coming up to the reunion from Virginia, the Milliken’s and John White on coming down from Maine, and Joey T for just gracing us with his presence!! 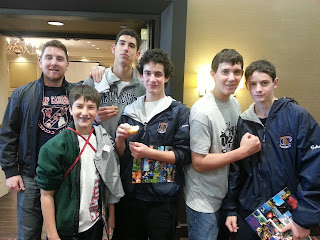 The reunion started out with a bang at Fun & Games with loads of arcades and multiple games of action packed laser tag.  After numerous guys cashed out their tickets for some insane prizes, we all headed to the Crowne Plaza for some classic chicken tenders and french fries.  After we wrapped up with our ice cream sundaes, we watched the 2012 photo slideshow and DVD yearbook.  The video yearbook was a huge hit and all of our 2012 campers and staff should be receiving the video and hoofprints real soon.

Camper Updates:  Ben Milliken is keeping real busy.. being involved with a swim and soccer team.  Ben is also playing the clarinet and piano.  Hopefully Ben will share his clarinet talents at campfire this summer!!  Henry Forman has been playing soccer for Newton North and has recently picked up bird watching as a hobby through out the New England area.  David Barber is currently training for the upcoming baseball season, but has been really busy with his band “Work in Progress.”  Carter McCray is getting excited for ski season and is enjoying his first year at the Fenn School.  Jason Haims is finishing up his fall baseball season, getting ready for ski season, and still into catching reptiles!!  Ryan Idelson loves maintaining a fresh haircut, playing soccer, and wants everyone to know that his favorite day of the week is Friday…SWAG!  Jordan Carey has his hands full playing football, soccer, and baseball, but is also enjoying his history class!! Cam Baker is playing QB for his football team and has found his passion for writing!! Micheal Rosen’s favorite class is business entrepreneurship and is currently in a highly competitive fantasy football league, good luck Rosen! Lucas Long is playing football for Fessenden, and claims he has picked up riding ostriches, doubt it, but good luck with that Lucas.  It was great seeing everyone at the reunion and catching up with the whole Caribou family.

Caribou’s the scene in 2013!! We hope everyone effected by Hurricane Sandy is safe and fully recovered.  Keep in touch